Written by Bankerage Published on November 22, 2021 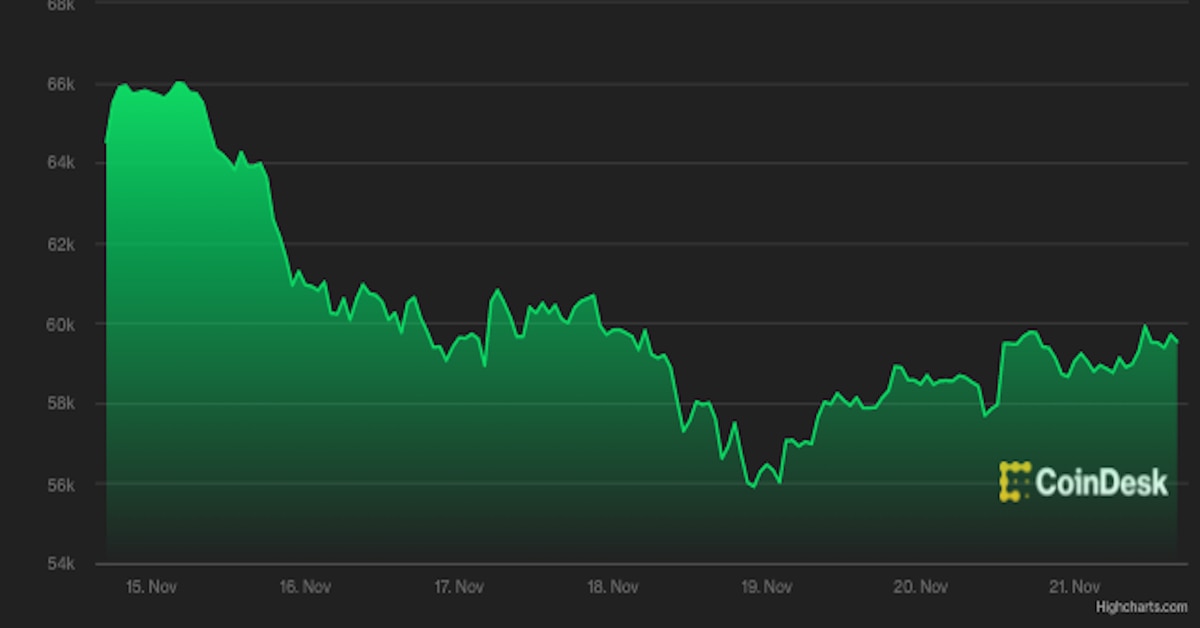 Market moves: Bitcoin continues to drift below $60,000 as Biden tees up his pick for Federal Reserve chair.

Technician’s take: Momentum is still positive on a weekly basis, which is consistent with a bullish uptrend.

Catch the latest episodes of CoinDesk TV for insightful interviews with crypto industry leaders and analysis.

Bitcoin continued to drift below $60,000, as cryptocurrency analysts looked ahead to a week of possible, reduced trading activity as a result of the U.S. Thanksgiving holiday on Thursday. Ether held steady for much of the weekend above $4,300.

Investors following bitcoin as an inflation hedge will also look for an early read on how holiday shoppers are responding to the fastest consumer-price increases in three decades. That’s especially true as supply-chain bottlenecks stymie deliveries on some items while discouraging retailers from offering deep discounts.

Another highlight this week could come from an expected announcement from U.S. President Joe Biden for his pick to lead the Federal Reserve. The announcement could have implications for cryptocurrency industry regulation and monetary policy, although some experts say the two top candidates – current Chair Jerome Powell and Fed Governor Lael Brainard – are so similar in their policy positions that the choice may not make a big difference.

The weekend saw little evidence of any breakout from the recent market pattern, where bitcoin appears to be establishing a new price range around the pivotal $60,000 level.

“Prices will likely be contained, with a slight bearish bias,” the digital-asset firm Eqonex wrote Sunday in a newsletter.

Bitcoin (BTC) is stabilizing after a near 10% decline over the past week. The cryptocurrency is holding initial support above $56,000, although resistance around $65,000 could limit further upside over the short term.

The relative strength index (RSI) is oversold on intraday charts, which could encourage brief buying activity. On the daily chart, the RSI is approaching oversold conditions similar to late September, which preceded a price recovery.

On the weekly chart, bitcoin’s long-term uptrend remains intact given the upward sloping 40-week moving average. Momentum is still positive on a weekly basis, which is consistent with a bullish uptrend. And the monthly price chart shows no signs of upside exhaustion yet.

However, the weekly RSI is declining from overbought levels, albeit less extreme relative to January. This means bitcoin is vulnerable to higher volatility as buyers take some profits.

For now, bitcoin will need to hold support and sustain a breakout above $69,000 in order to yield an upside target toward $85,000.

In case you missed it, here are the most recent episodes of “First Mover” on CoinDesk TV:

ConstitutionDAO Contributor on the Crypto Group’s Auction Loss, Why Are Crypto Prices Dropping?

After Being Foiled by a Billionaire, ConstitutionDAO Faces Lingering Questions

Leverage Demand, Not Leverage Itself, Down in Bitcoin

Public Banking vs. Open-Source Money: What Omarova for OCC Means

Biden and the Fed: Why Powell or Brainard Won’t Change Much for Crypto