Written by Bankerage Published on December 23, 2021 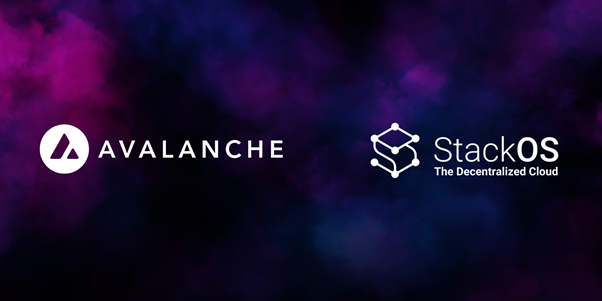 Decentralized cloud protocol StackOS is joining forces with the Avalanche blockchain platform, after being declared the network’s preferred DeCloud provider for its growing developer ecosystem.

The confirmation follows a poll conducted on the official StackOS Twitter account, one that saw users quizzed about which blockchain they would like to see the protocol become interoperable with. After thousands of followers had their say, Avalanche was named the winner with 75.9% of votes cast, beating out the likes of Cardano, Polygon (formerly Matic), and Solana.

In addition, the DeCloud leader will support future technical Avalanche events by sponsoring compute, rewards, and educating developers on how to anonymously leverage StackOS’ no-code, UI-based application deployment engine in a matter of minutes.

While Bitcoin popularized the idea of decentralized currency, and the defi movement has precipitated the emergence of an open and transparent alternative to legacy tradfi, StackOS is determined to make itself the face of DeCloud.

In doing so, the permissionless protocol hopes to rumble the established big cloud cartel dominated by centralized entities such as Amazon, Google and Microsoft, principally by saving clients the hassle of paying for expensive set-ups and ongoing maintenance overheads. Global spending on public cloud services was predicted to grow by 23.1% this year, from $270 billion in 2020 to $332.3 billion.

Unlike existing cloud solutions, StackOS requires no sign-up or infrastructure costs, with computational power and storage provided by third parties (individuals, businesses) who receive cryptocurrency rewards in the form of $STACK tokens. Literally, anyone can join the network and start supplying their computational power.

The Avalanche team has requested for its nodes to be added to the one-click deploy StackOS App Store, thereby creating a network of ‘unstoppable’ Avalanche nodes and giving developers the ability to expeditiously deploy an Avalanche node.

Devs will also be able to take advantage of deploying work-in-progress applications on private testnets before promoting them to the mainnet.

According to StackOS, the number of service requests served on the apps deployed on its platform recently surpassed the three-million mark, a little more than three months since the mainnet launched in August.

The relationship with Avalanche is not the first time StackOS has provided its DeCloud services to a fast-growing Layer-2 blockchain. Other large projects have also adopted StackOS’ decentralized cloud to bring one-click nodes and seamless deployments to their developer ecosystem.

StackOS was previously incubated as the de facto DeCloud solution on the NEO platform, too. Some 250 individual projects now deploy on Stack’s trustless cloud, which is powered by cluster operators scattered around the world.

Within the growing ecosystem, community members can become governors with two tiers – Node Apprentice and Node Authority – corresponding to the number of tokens staked. StackOS governors can variously influence burn rates per resource purchase transaction and the height of annual yield in the governor pool.

Like its new DeCloud provider, Avalanche has enjoyed impressive traction in the market since launching last year. Ava Labs’ layer-2 scaling solution, which supports a glut of DeFi dApps and subnets and is fully interoperable with Ethereum, is now a bonafide top 10 blockchain due to its ultra-low fees and high throughput (4,500+ tps). With a powerful DeCloud provider now part of its armory, Avalanche’s inexorable expansion looks set to continue.

Avalanche is the fastest smart contracts platform in the blockchain industry, as measured by time-to-finality. Avalanche is blazingly fast, low cost, and eco-friendly. Any smart contract-enabled application can outperform its competition by deploying on Avalanche. Don’t believe it?

StackOS is a cross-chain open protocol that allows individuals and organizations to share their computing resources and collectively offer a decentralized cloud; where developers around the world can deploy any full-stack application, decentralized app, blockchain private nets, and main net nodes.

We aim to provide the world with “The Unstoppable Infrastructure Protocol”, which will allow any person across the world to deploy their application without incurring heavy cloud management costs and freely run any application they wish to run. StackOS furthermore intends to help brick and mortar businesses around the globe, to go online cost-effectively and securely with minimal technical overhead.